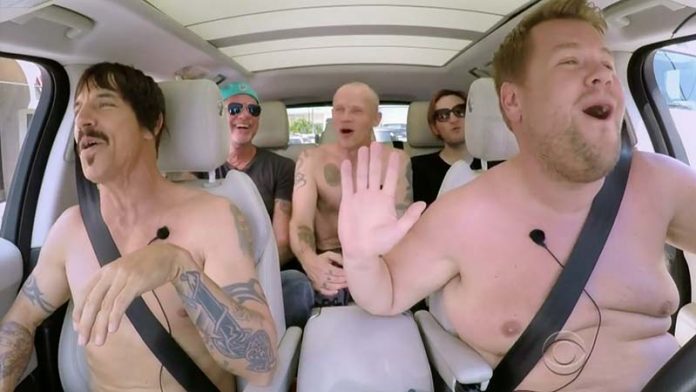 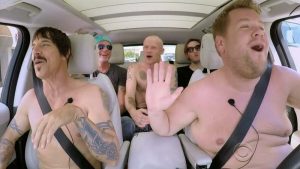 The Red Hot Chili Peppers stripped off with James Cordon in the latest version of Carpool Karaoke.

Quickly regretting asking the band members for directions as they argued about whether to turn left or right, Cordon asked whether he could play some music and the band started singing along to their hit Can’t Stop.

The car ride was made entertaining with their other hits Give It Away and By the Way, as well as a snippet from a song from the musical ‘Oliver’, Food Glorious Food.

However, things got weird when frontman Anthony Kiedis brought up his wrestling past before he settled into a life of rock.

Cordon couldn’t help himself and he stopped the car and challenged Kiedis to a wrestling match on a strangers front lawn.

The host quickly broke down in laughter and paved the way for the rock star to win.

“I almost didn’t recognise you when you came up because you had clothes on,” Corden joked to Kiedis as they continued driving.

The star explained life seems more “natural” with bare flesh showing and he started to remove his socks and shirt.

Corden and bassist Flea took from Kiedis’ lead and got into their birthday suits as well, while they jammed out to The Zephyr Song.

A tweet by the band acknowledged it was a “bizarre” version of Carpool Karaoke, but a great laugh, nonetheless.