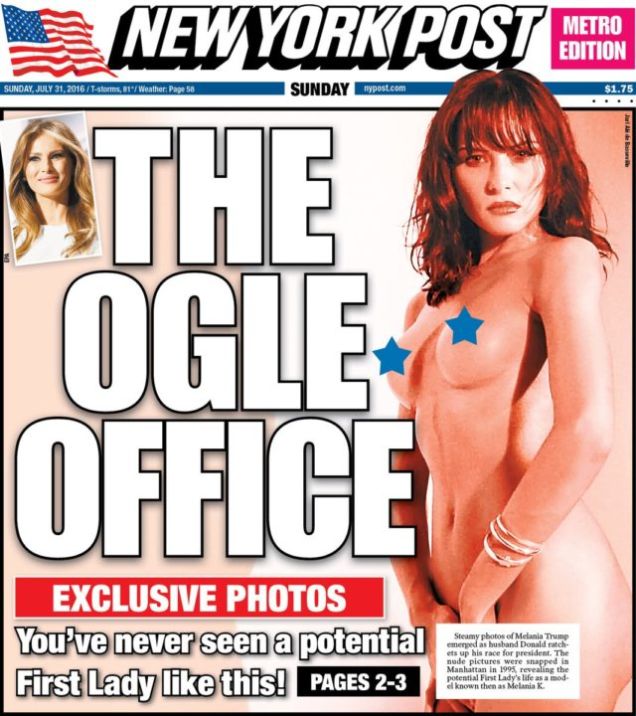 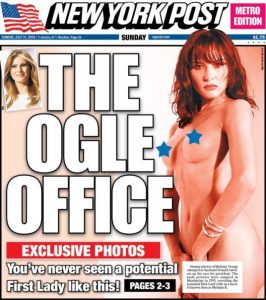 New York Post has recently published ‘exclusive’ photos of presidential candidate, Donald Trump’s wife Melania, but rumours have been circling that it could be a ploy by the Trump party to distract people from the fact that he got humiliated by the father of a former U.S. Army Captain.

To be honest, I wouldn’t put it against them to try something like this. The nude photos of Trump’s wife were taken in Manhattan in 1995 by a man named Ale de Basseville, a French ex-con man.

They were first featured in the January 1996 issue of a now-defunct French men’s magazine, Max.

The Republican presidential candidate has always taken any and every opportunity to mention his wife’s previous career, much like this statement he released to the New York Post, “Melania was one of the most successful models and she did many photo shoots, including for covers and major magazines. This was a picture taken for a European magazine prior to my knowing Melania. In Europe, pictures like this are very fashionable and common.”

One of Trump’s spokesman, Jason Miller added by saying, “They’re a celebration of the human body as art. There’s nothing to be embarrassed about. She’s a beautiful woman,” in a recent appearance on CNN.

It’s a little odd for photos that are 21 years old to turn up out of the blue like this and while there are probably many theories as to why this is happening, the least convoluted version is that the photographer of these images wanted a profile boost. No one really knows why these raunchy photos of Melanie Trump have come to surface but one thing’s for certain, it’s probably not going to be the last time we hear of something odd like this coming from the Trump party.

What are your theories about this recent development? Let us know in the comments below.