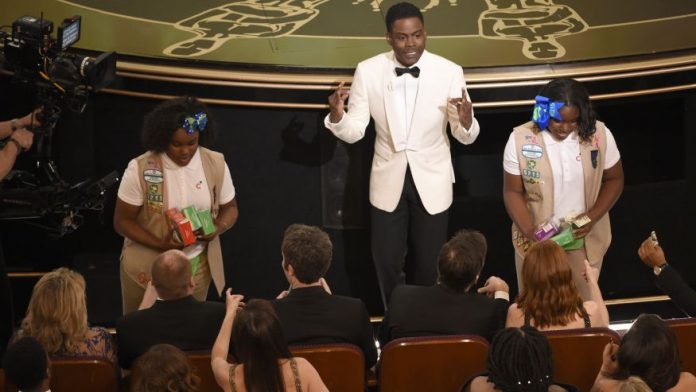 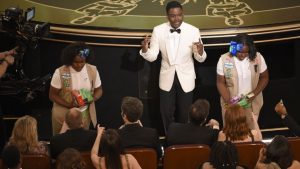 If Chris Rock doesn’t win Dad of the Year then I don’t know who else will! Apart from killing it with his controversial yet amusing monologue, Rock also approached the stars and sold Girl Scout cookies for his daughters.

The comedian explained that his daughters were having trouble beating their rival Girl Scouts. The proud dad then showed a picture of his adorable ‘princesses’ with their fellow scouts before urging the crowd to “…reach into your millionaire pockets, and I want to you buy some of my daughters Girl Scout cookies.” He did pinpoint a few stars including first time Oscar winner Leonardo DiCaprio. ”Leo! You made 30 million, come on.”

As if that wasn’t the best idea ever! The crowd was more than willing to help and later on Chris revealed the Scouts raised a grant total of $65,243! Woah! Unfortunately the $65,000 was revealed by TMZ to be just a joke and that the actual amount raised was $2,500. Still, it beats their goal of $600 from last year.

To be honest I would be more excited about meeting all of those celebrities more than anything. They probably would have raised more money if they got the stars to autograph the cookie boxes and trying to sell those.

What did you think of this year’s 88th Academy Awards? Let us know in the comments below!