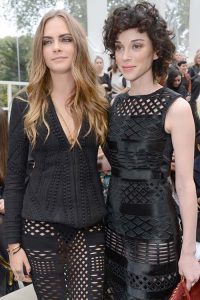 Cara Delevingne and St Vincent, aka Annie Clark, broke up after dating for a year and a half due to the pressures of Delevingne’s Suicide Squad tour.

It was only a month that model-turned-actress Delevingne was gushing over Clark in interview’s prior to the film’s release.

Reportedly, the couple were not able to handle the pressures of a long-distance romance.

The final result came about after Clark had failed to appear at Delevingne’s birthday party, where the actress was celebrating the night away with Suicide Squad co-star Margot Robbie.