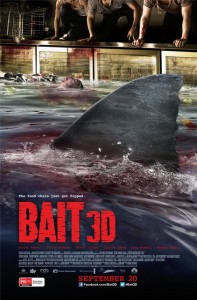 Bait 3D is about a tsunami that swallows a sleepy beach community. A group of survivors find themselves trapped in a flooded underground supermarket and soon discover they are not alone, the tsunami has brought unwanted visitors from the depths. The survivors quickly realise their battle is not only to overcome the threat of drowning, but a threat far more sinister – hungry great white sharks.